The biggest fans of Outlander from Wales (their description) spent a weekend following their own “Outlander Trail” from Edinburgh. They have been reading Diana Gabaldon’s Outlander series since it was first published, and watching the Outlander Starz TV series based on the books.

Here’s their write up:

We had an amazing time doing the OUTLANDER TRAIL. We visited Doune Castle. Culross, a lovely little coastal village. Our next visit was Aberdour Castle, then Blackness Castle. Stunning views where Jamie was imprisoned and whipped. Our next stop was Linlithgow Palace. We finished our tour in Falkland and of course Lallybroch near Linlithgow.  We had to stop from going through the stones at Tuilyies Standing Stones.  Meeting Susan was the icing on the cake, we learnt so much, and it was lovely to meet a fellow Outlander fan. Jane & Gareth, Jan & Hilary, Wales x

On the Outlander Trail

Jane, Jan and Hilary (and Gareth who was driving and said he’d never seen the TV Series), spent 3 days touring in central Scotland from their base in Edinburgh.

To help you plan your own Outlander Trail, here’s a little more information for you on the places they visited.  Our guests had downloaded a helpful guide from VisitScotland to help them plan their visit – it was already marked up with ideas for their trip when they arrived in Edinburgh.  Having visited some of the locations before, we were amazed at quite how much they managed to cram into one weekend. We’re delighted they’re planning on coming back to see more. 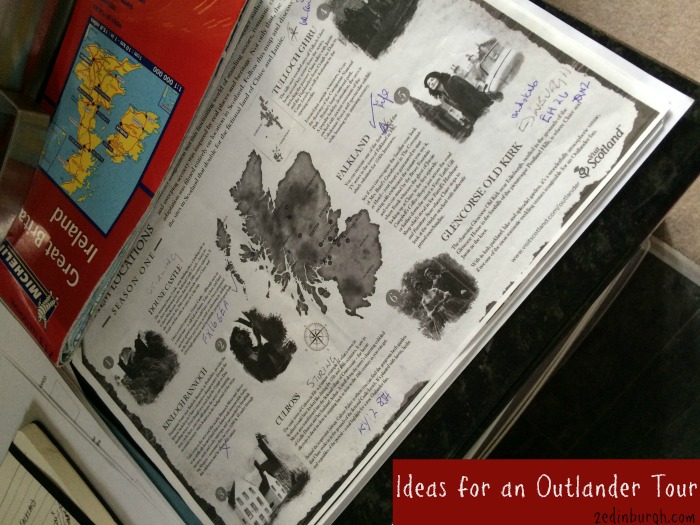 Doune Castle in Perthshire was used as the location for Castle Leoch in the filming of the Outlander  Starz TV Series. It’s a Historic Environment Scotland property, so if you’re planning on visiting several of their properties during your stay, you might wish to purchase a 3-day or 7-day Explorer Pass.  There is also an option to buy a Scottish Heritage Pass which represents excellent value for a 7-day pass if you’re going to be visiting lots of attractions throughout Scotland.

We hadn’t ever been to Doune Castle before, so set off one morning to do our own exploring.  It was an interesting half-day trip for us from Edinburgh, as we decided to spend a little time walking round the village of Doune after our visit to the Castle.  We did find that when we arrived at about 10:15 am, there were already two tour buses at the Castle, and the car park was a bit of a jostle for position.  However, after the initial rush (we think it may have been the first or second stop on a day trip for the tour parties), it quietened down a lot and we were able to relax a bit more and enjoy our visit. 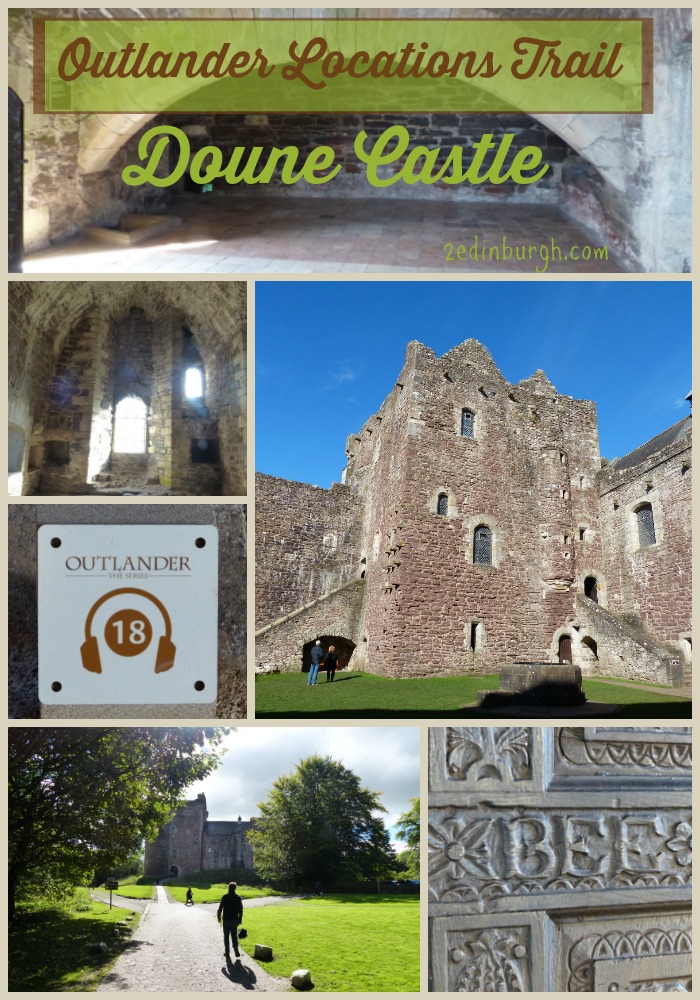 On arrival we were provided with headsets for an audio tour of the property.  The tour was narrated by Terry Jones of the Monty Python team as the film Monty Python and the Holy Grail was filmed on location at Doune Castle back in 1975.  We discovered that there were some places on the tour where there was also an audio piece by Sam Heughan who plays Jamie in Outlander, which we really enjoyed hearing.  It made such a difference to our visit to hear a bit about the actors’ experiences of filming there.

In Sam’s commentary he talks about the conditions, and the difficulty of getting all the filming equipment in to the central courtyard of the castle.

When we got back from our day out we binge-watched the first three episodes of Series 1 again, and could see exactly what he meant about barrowing tons of topsoil into the castle to recreate the early scenes where Claire is kept captive and works as the medic for the Clan Mackenzie.

The bus tour visitors to Doune Castle were spending around 45 minutes – 1 hour there.  We took our time, enjoyed listening to all the taped commentary and exploring all the rooms as well as walking down to the river bank to see if we could find some more distant view points (we didn’t but enjoyed the early autumn day).

We also walked into the village of Doune along the banks of the River Teith on a muddy path. 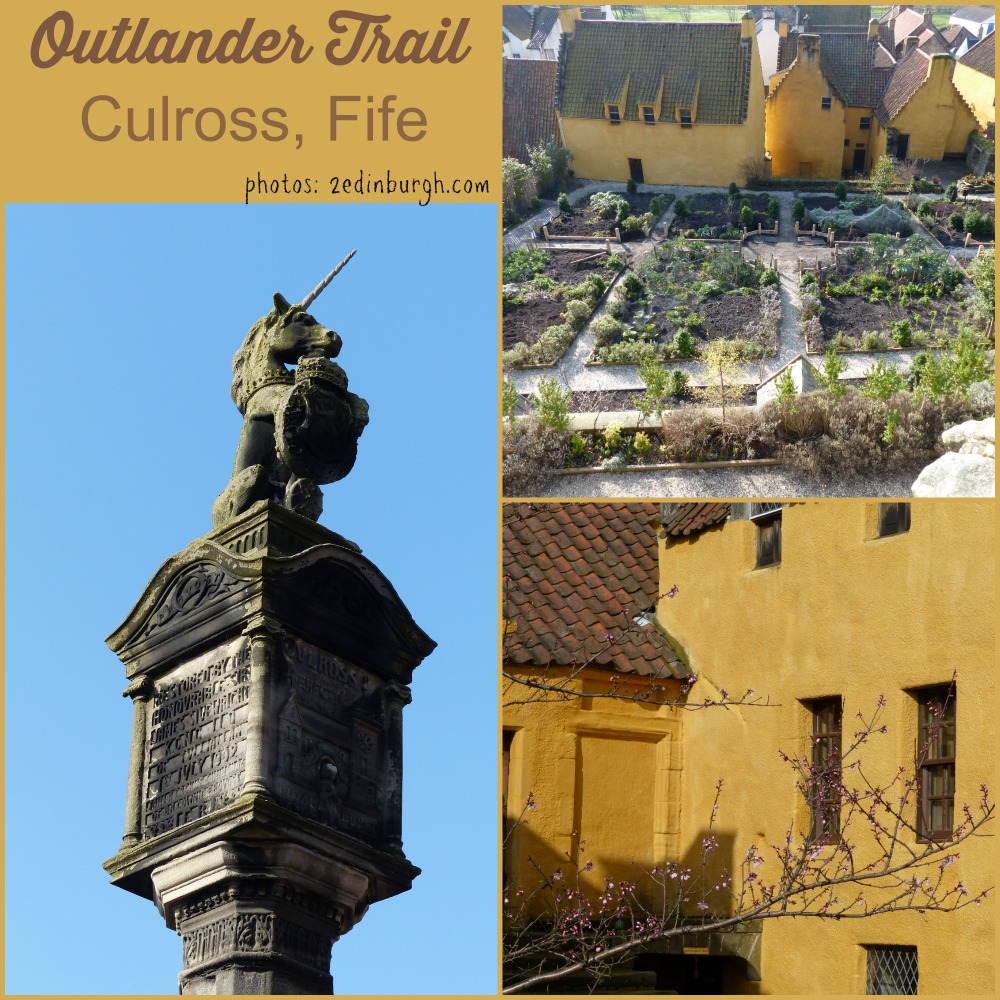 The village of Culross has been used as Cranesmuir, with Geillis Duncan’s house being a real property in the village which was repainted grey for the filming.  It’s been restored to its usual white colouring now.

You can visit Culross Palace where the prettily laid-out garden was used to film Claire’s herb garden. The National Trust for Scotland has written a guide which gives more information about the filming locations in Culross.

We’ve also visited on walks on the Fife Coastal Path.  The first section from Kincardine to Limekilns takes in Culross.

We’d recommend a stop at The Biscuit Cafe while you’re in the village. 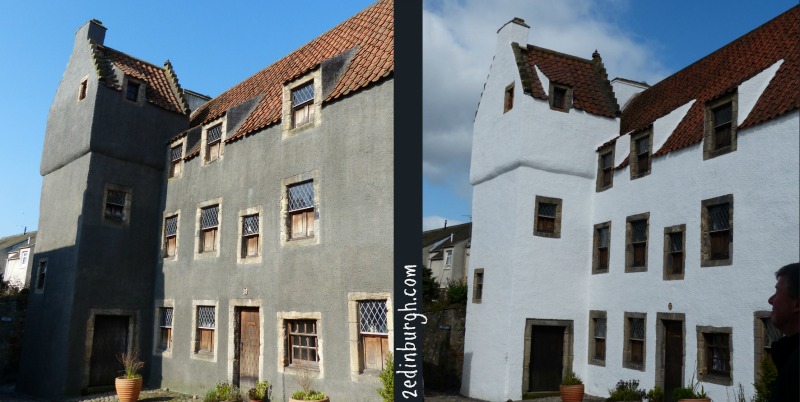 We enjoyed visiting the doo’cot and seeing the amazing restoration work on the terraces too.  There is a beautiful garden and nearby beaches of Silver Sands and Black Sands Aberdour are worth a visit. 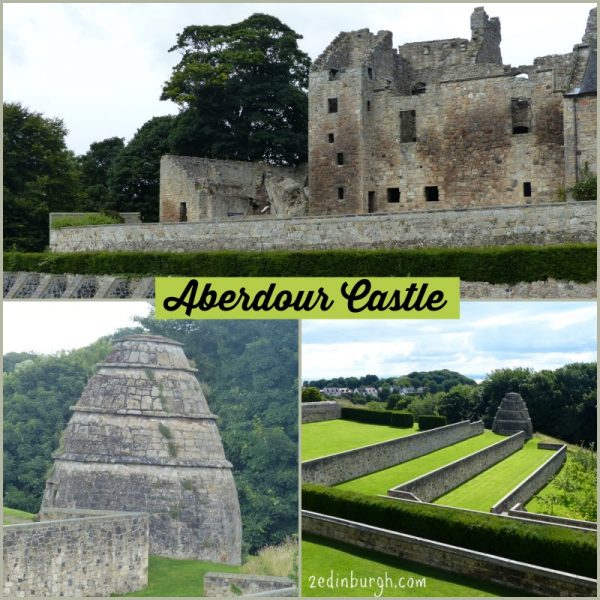 Blackness Castle was the stand-in for Fort William where Jamie was incarcerated, and where Black Jack Randall doled out his punishment in Episode 6 of the first Starz TV series of Outlander.

Blackness Castle is another property in the guardianship of Historic Environment Scotland, and worth a visit not only for its Outlander associations, but for the amazing views both of and from the Castle.  If you’re lucky you might also get to hear one of the guides there, Graeme, piping a welcome to the castle. 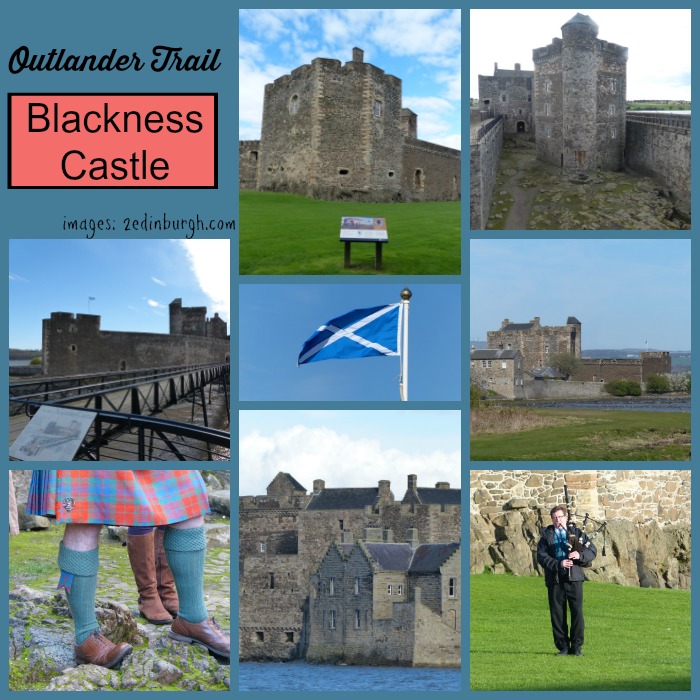 Here’s what happened when we were in the gift shop:

Our second castle of the day was @historicscotland #BlacknessCastle also on the #Outlander trail. While we were in the gift shop at the end of our explorations one of the visitors spotted some of the Outlander merchandise in the shop and said “Oh I didn’t realise Outlander was filmed here, which part?” Paul the Steward told her that the incarceration scenes and whipping of Jamie were filmed in the courtyard. “I didn’t like the show,” she said, “too much sex. I think they ran out of plot.” At that point I pointed out that there were another 9 books in the series, so I think there is plenty more plot!

We’re more accustomed to thinking of Linlithgow Palace as a stop for historians following the trail of Mary Queen of Scots, who was born in the Palace.  However, it becomes a stop on the Outlander Trail for fans wishing to explore the fascinating history as well as seeing the location which became the entrance to Wentworth Prison in the TV Series. 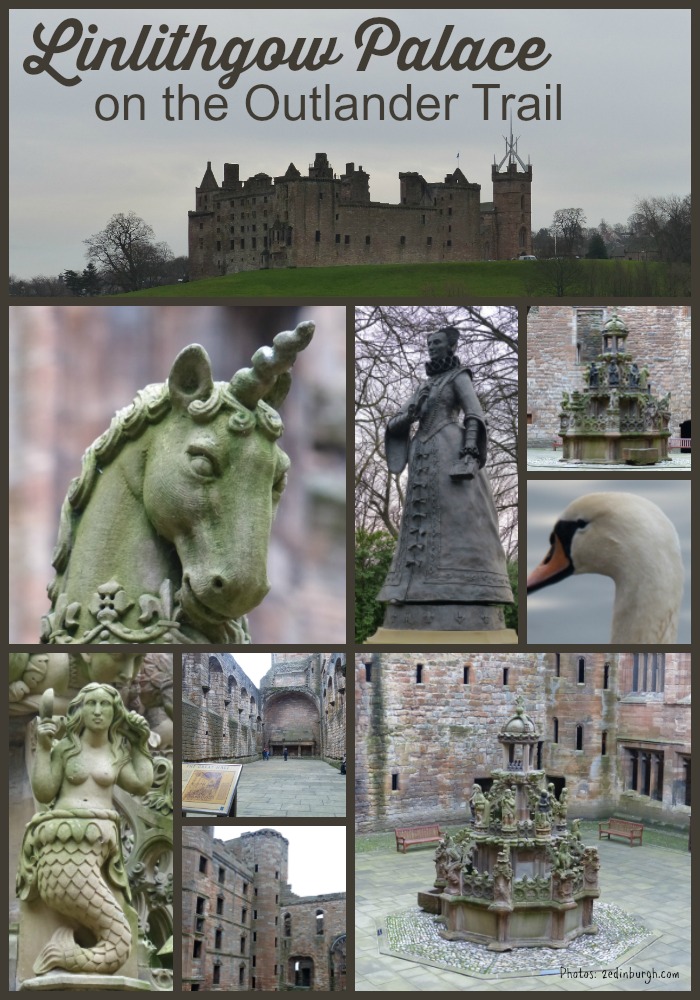 While you’re in the area, there’s so much more to see as you can read on Kim Kjaerside’s blog about his visit to Linlithgow and the surrounding area.  Our photos are from a winter’s day when we enjoyed a walk around the loch known as Linlithgow Peel.

Gosh, our Outlander Fans did do a lot on their 3-day Outlander Trail! They even made it to Falkland in Fife, which as you’ll know doubled for 1940s Inverness for the scenes where Claire and Frank go on holiday to get to know one another again after their military service during the Second World War.  (As I write, I think how can non-Outlander fans possibly understand all this!?)

I remember going to Falkland Palace on school trips when learning about history and Mary Queen of Scots, and more recently for marvellous afternoon teas in one of the many tearooms around town.

Falkland Palace is a National Trust for Scotland location, and there are beautiful gardens surrounding the Palace where you might like to spend some time too.  I seem to have managed to miss taking a photograph of the fountain in the centre of the town where Frank has an encounter with a ghost, so you’ll have to re-watch the episodes, or visit on your own Outlander trail if you want to see this.

This blog post has taken a long time in the preparation, as these photos were taken back in October 2013 just as the filming was taking place.  Time for another visit I think. 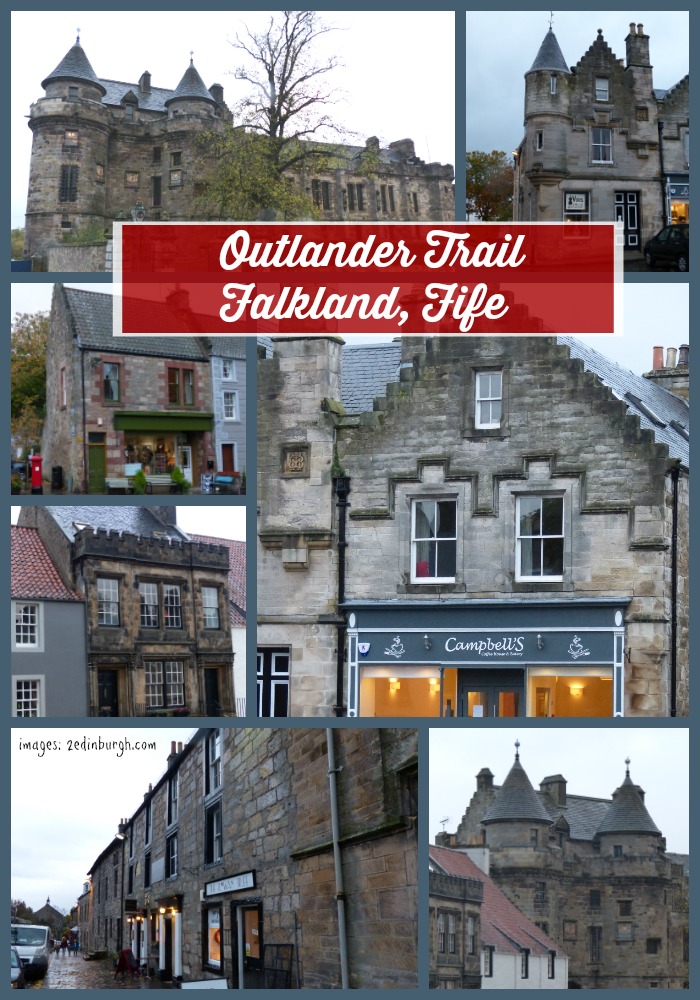 The Outlander scenes set at Lallybroch were filmed at Midhope Castle on the Hopetoun Estate.  You can’t go inside the property, but if you wish to visit there are some guidelines on the Hopetoun Estate website on how to obtain a pass to visit.  Our Outlander fans kindly supplied us with photos of their visit which we’ve put together in this image for you to pin for your own trip planning. 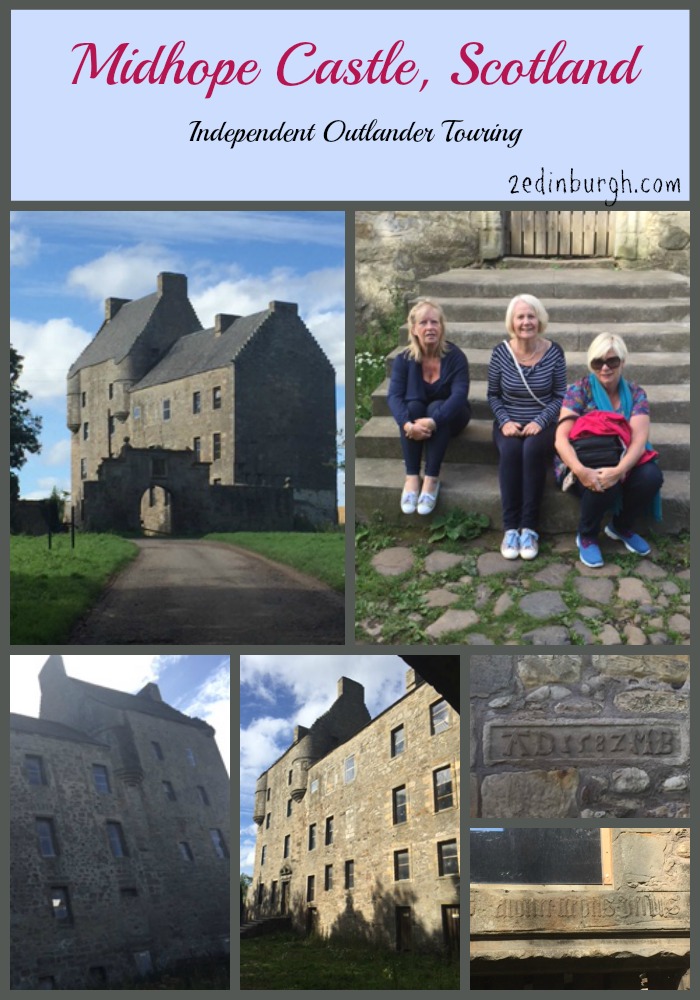 Updated [Feb 2017]: we paid a visit to Midhope Castle in early spring just as the snowdrops were coming up.  Here’s a little video clip from our day trip: 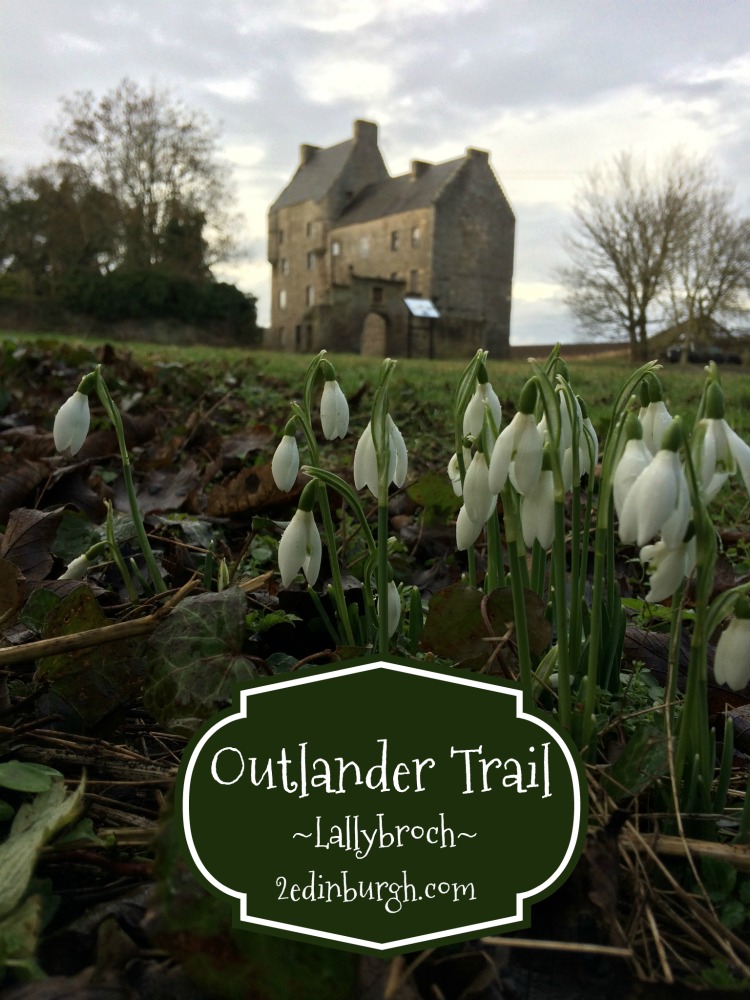 I thought that the location of these standing stones might remain a mystery, until a little on-line detective work revealed that a slight spelling mistake had led me off in the wrong direction!  Thanks to Mary’s Meanders Tours for their help in tracking down the location for me.  There’s a super article which I’ve found about the stones, which has lots more information for you if you’re planning to include this in your tour. The Tuilyies Standing Stones are not an Outlander location, but if you don’t have time to visit Clava Cairns near Culloden, then they may help you create the atmosphere.  Just be careful you don’t travel through time there!

We’re amassing a little library of Outlander Trail items here on the 2edinburgh blog, as we’re fans ourselves.  We look forward to season 5 in Spring 2020. We’ll continue enjoying visiting the locations and sharing them with you.

‘Craigmillar Castle was used to film the scenes of Ardmuir Prison, and is another Historic Environment Scotland location. 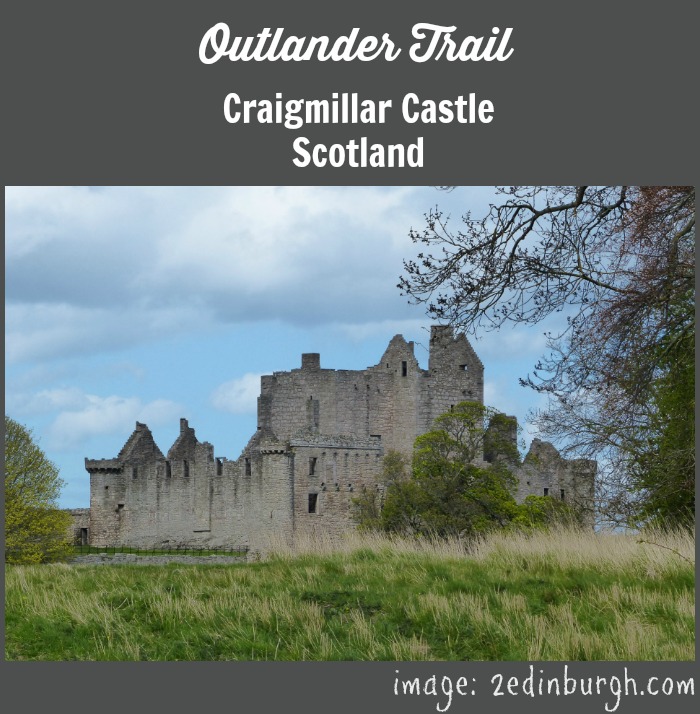 Here’s where you’ll find our other articles:

Outlander Exploring on the Royal Mile

We look forward to welcoming you to Edinburgh to enjoy touring Scotland on your own Outlander Trail of film and book locations around the country.

Pin it for later – Outlander Trail in Scotland 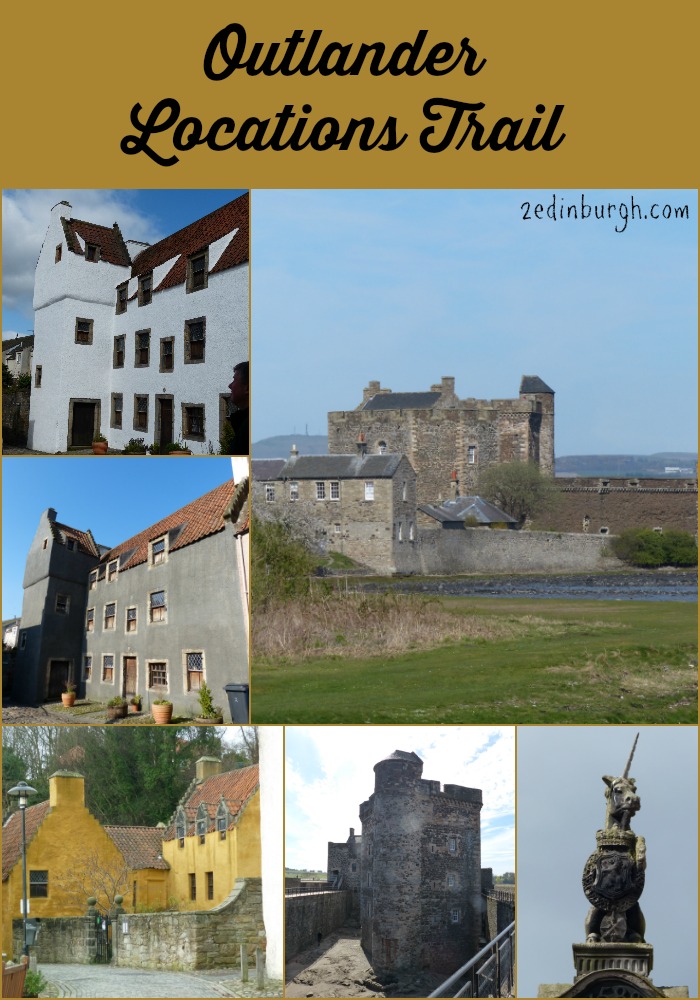 If you have enjoyed reading this blog and want to read more of our blogs click on the link www.2edinburgh.com to return to our home page