The bottom section of the Royal Mile is known as the Canongate. It is here you will find the Canongate Kirk. This is the Queen’s church when she is in residence at Holyrood Palace and was the venue for the marriage of Zara Phillips (daughter of Princess Anne) and Mike Tyndall. Canongate Kirk is an ancient place of worship opened in 1691. The twin cherry trees planted at either side of the entrance to the church are in flower in April and early May each year, making it a particularly beautiful time to visit. 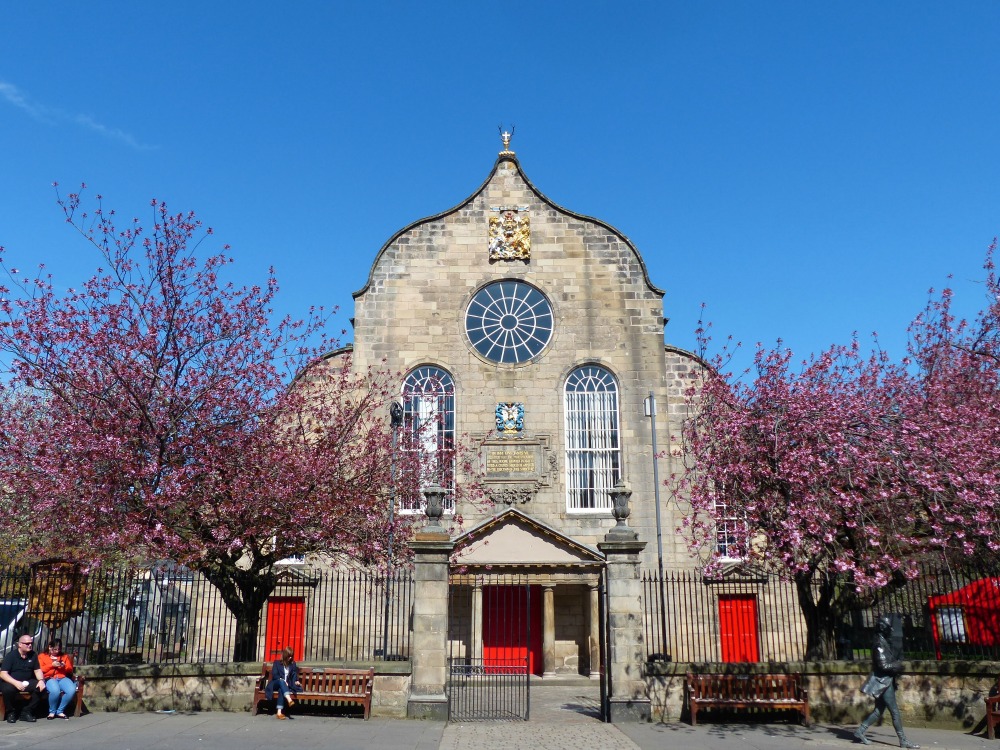 There are commemorative plaques by the cherry trees, showing that they were planted by HM Queen Elizabeth on 25 June 1952 and HRH the Duke of Edinburgh on 26 June 1953. 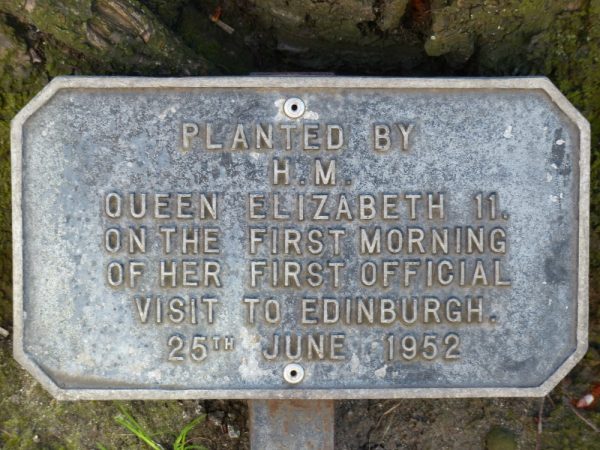 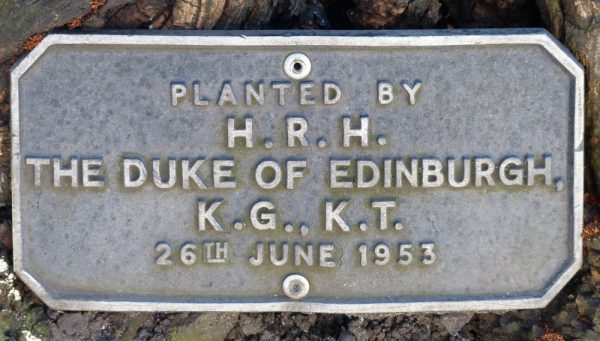 The Canongate Kirk is the parish church for the surrounding area, which includes Edinburgh Castle, the Palace of Holyroodhouse and the Scottish Parliament.

There is a small churchyard surrounding the Kirk, where you’ll find the graves of many famous citizens of Edinburgh, and there’s an information board giving details of celebrities interred in the area. 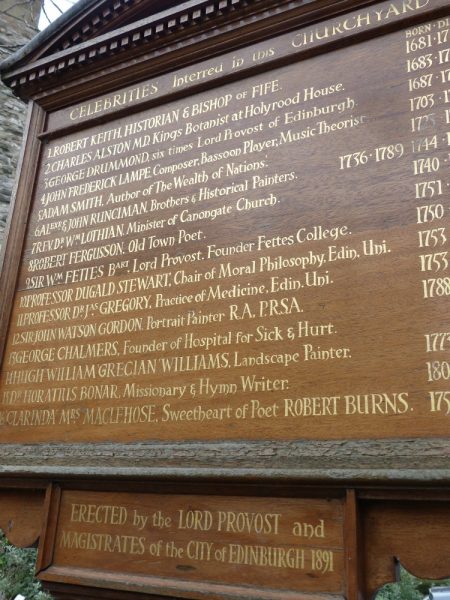 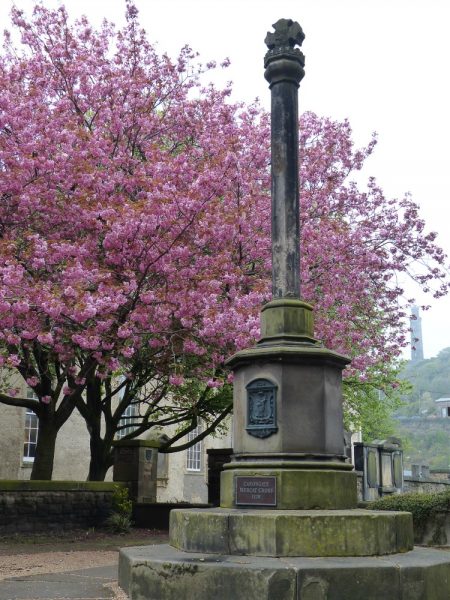 As well as being open to attend church services, Canongate Kirk is often open at other times for tours given by the Friends of Canongate Kirkyard. There are often concerts in the building, and during August Edinburgh Festival Fringe events are also hosted here.

The interior is well worth a visit to discover more about the history of the Kirk as well as the displays of military colours and honours as the Canongate Kirk is the Regimental Kirk of The Royal Regiment of Scotland. 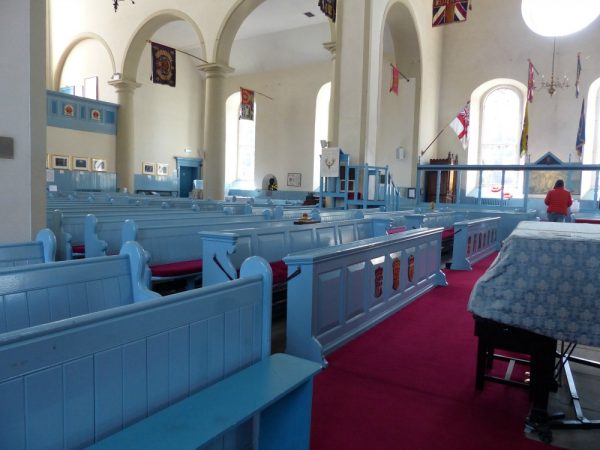 We often welcome fans of Diana Gabaldon’s Outlander books to Edinburgh. The Starz TV adaptation of “Outlander” has made touring the locations where the series was filmed even more popular.  For those who’ve read Dragonfly in Amber, part six of the book is set in Edinburgh, and indeed some of the action takes place around Canongate Kirk as Claire and Jamie are asked to come to the Kirk in the Canongate to meet with Colum. It’s an important meeting as Colum is mulling over his decision “whether the MacKenzies of Leoch go for King James or King Geordie.”

So if you’re following all the locations of the books, rather than just those used in the TV adaptation, stop off at Canongate Kirk and imagine the scene as Claire perches on a marble gravestone, trying to keep warm, while Jamie and Colum have their discussion. We’ve put together a whole series of articles about Outlander Exploring around Edinburgh which will help you find the locations you want to visit.

As a Parish Church for the surrounding area of central Edinburgh, many people will find records of their ancestors registered in the Canongate Parish.  Indeed, in researching the Urquhart side of our family tree (Susan’s family), there is an extensive record of Urquharts registered in the parish, as well as recorded in the Census records for the local area. Opposite the Kirk, you will find the Museum of Edinburgh which is also worth a visit to find out more about the history of the area and about how the local residents lived and worked. 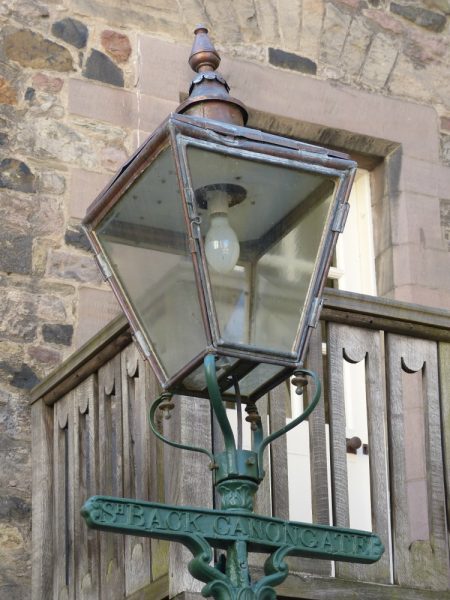 The lamp standard pictured here (situated at the Museum of Edinburgh) bears the street name “Sh Back Canongate” or South Back of Canongate, which was the former name of Holyrood Road.  In the 1861 Census there was a family living at 62 South Back of Canongate which included George Urchart (Urquhart) aged 39, his wife Alison and their 7 children: George, Henry, William, Jessie, James, Euphemia and Charles.  George was working as a Carter while their son George (16) was a carter to a cowfeeder, with Henry (14) and William (12) being cowfeeder’s boys.  George and Alison were married on 17 November 1843 in the Canongate parish.  Their employer at the time was Messrs White of 269 Canongate, and Alison’s father George Rehren was also working as a Carter in South Back of Canongate.  In 1863 they had a son David Turner Robertson Urquhart (born 10 July 1863 at their home at 62 South Back of Canongate).  He is my great-grandfather as his son William Urquhart was my grandfather.

The family connection to the area continues through William’s wife, Helen, my grandmother, who worked at the Headquarters of the Scottish and Newcastle Brewery which was situated on the land which is now occupied by the Scottish Parliament.  She lived nearby, just off Holyrood Road.

If you find links to the Canongate Parish in your family tree, you’ll find a visit to Canongate Kirk a must on your ancestral tour of Scotland.

And of course, weddings are still held at the Canongate Kirk to this day. (Even royal one’s!) 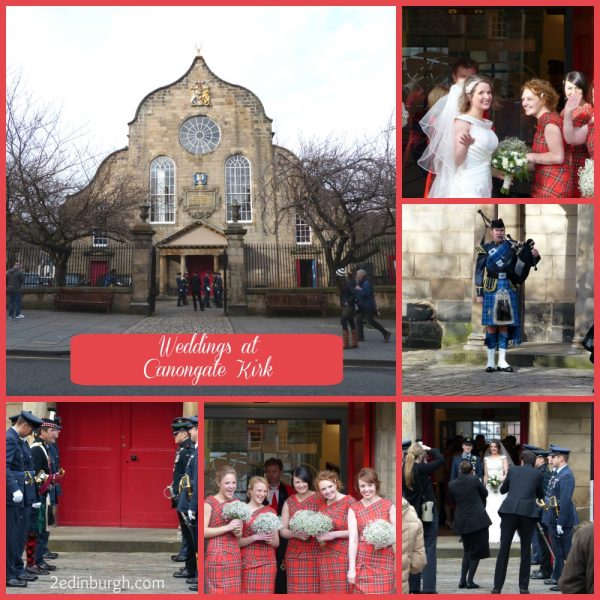 I do hope you have found this blog informative and will consider visitoing Canongate Kirk on your trip to Edinburgh.

For more blogs and information on a trip to Edinburgh click on the link www.2edinburgh.com 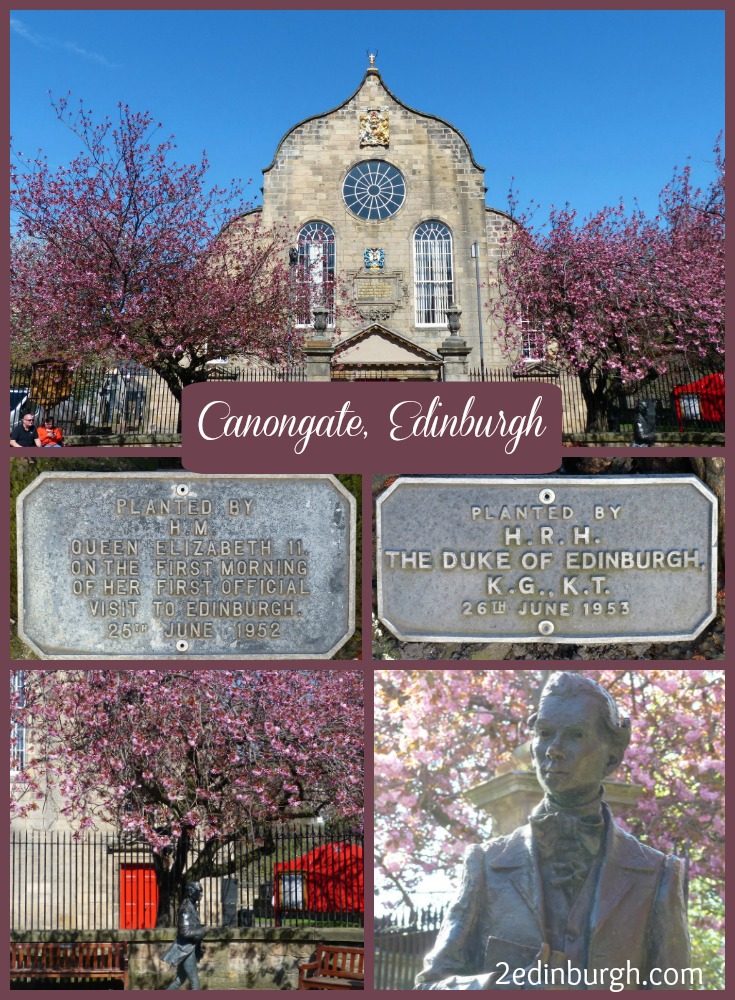 4 thoughts on “Canongate Kirk an Ancient Place of Worship”

This website uses cookies to improve your experience while you navigate through the website. Out of these, the cookies that are categorized as necessary are stored on your browser as they are essential for the working of basic functionalities of the website. We also use third-party cookies that help us analyze and understand how you use this website. These cookies will be stored in your browser only with your consent. You also have the option to opt-out of these cookies. But opting out of some of these cookies may affect your browsing experience.
Necessary Always Enabled

Any cookies that may not be particularly necessary for the website to function and is used specifically to collect user personal data via analytics, ads, other embedded contents are termed as non-necessary cookies. It is mandatory to procure user consent prior to running these cookies on your website.